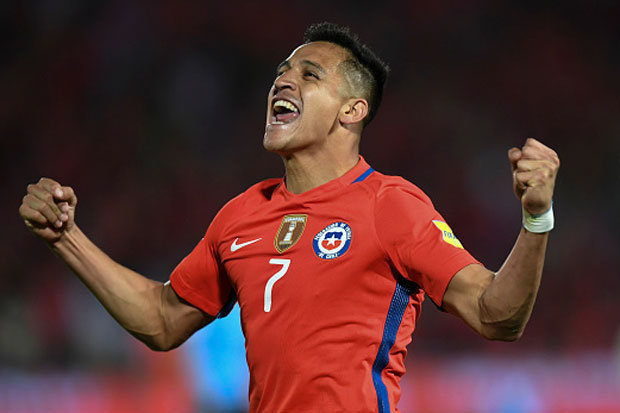 The forward only just returned from a hamstring injury with the club warning Chile not to risk him. Sanchez played anyway, and he was heavily strapped yet he scored two times in 16 minutes. He received an overwhelming standing ovation when he exited the pitch in the 84th minute.

Arsenal boss Arsene Wenger warned sternly that playing in the game would be a “suicidal decision” for Sanchez as it might leave him with a more serious injury. Wenger was not ready to risk the striker as it could impact Arsenal’s title chase in a very competitive term. Sanchez’s display will allay the French tactician’s fears going into the game against Manchester United this weekend.

Edison Cavani opened scoring for Uruguay within 15 minutes before Chile got an equalizer just before the recess. Eduardo Vargas’ header did the magic, and Sanchez put them ahead in the 60th minute. He got the second goal as well, sending fans wild. Everyone knew what a victory would do to their World Cup hopes, particularly as they battle Argentina for a spot in Russia 2018.

Barcelona striker Luis Suarez had a chance to pull one back from the visitors but Man City goalkeeper Claudio Bravo stopped it.

Elsewhere, Lionel Messi scored a free kick and contributed as Argentina added another two goals to thrash Columbia 3-0, getting their campaign back on track. They place 5th with the victory and are hoping subsequent results would get them an automatic spot or a fighting chance in inter-confederation play-offs.

Log leaders Brazil defeated Peru 2-0 to remain at the top. Uruguay are in second place, Ecuador third, while Chile climb to fourth place above Argentina.